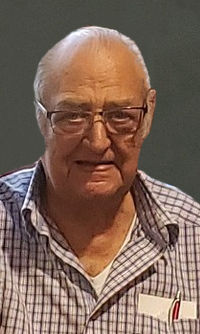 Duane Kahl, 87 of Glenwood, IA, passed away on January 20, 2020 at the Glen Haven Village in Glenwood. Funeral service will be held at 10:30 a.m. on Friday, January 24, 2020 at St. John Lutheran Church in Mineola, IA with Pastor Luke Kuenzli officiating. Burial with military honors will be in the Mineola Cemetery. Visitation will be from 5:00 p.m. to 7:00 p.m. on Thursday, January 23, 2020 at the Loess Hills Funeral Home in Glenwood.

Obituary
Albert "Duane" Kahl, 87, of Glenwood and a longtime resident of Mills, County, died January 20, 2020, at Glen Haven Village in Glenwood. He was under the hospice care of Visiting Nurse Association.

Duane was the only child of Albert Detlef Kahl and Dorothy Bowley Kahl. He was born August 21, 1932, on a farm near Mineola. He attended Sand Hollow School and Glenwood High School, graduating in 1950.

During the time he farmed with his father, Duane met Rosalie Leet, who worked at the Rex Theater in Glenwood on December 1, 1951. They dated until he left to join the U.S. Air Force in August 1952. Duane and Rose married on April 23, 1953. Together, they lived in Merced, Calif., (Castle Air Force Base) and Fairbanks, Alaska, (Ladd Air Force Base) while Duane fulfilled his military obligation. He attained the rank of Staff Sergeant and was honorably discharged in June 1956.

Duane and Rose returned to the Mineola area, where Duane farmed, and he eventually bought a farm of his own. Together, they became parents to a son, Albert David, and twins, Debi Sue and Danny Lynn.

In 1981, Duane began his second career as assistant cashier at Mineola State Bank, which later became Glenwood State Bank, Mineola branch. In 1999, Duane and Rose moved from their Mineola farm to a home in Glenwood. After 35 years of service at the bank, he retired on June 29, 2016 at the age of 84.

Duane was deeply committed to his community. He was a member of the Mineola Volunteer Fire Department, served many years as the "unofficial" mayor of Mineola, and was a driving force behind the Mineola Community Center. He was a lifetime member of St. John Lutheran Church in Mineola. For more than 60 years, he was actively involved in the Mineola Legion Post 705, serving in every capacity. He was instrumental in putting up the Avenue of Flags at the Mineola Cemetery. And, he was proud to participate for many years in the American Legion color guard that coordinated Memorial Day services at the Plumer, Dumfries and Mineola Cemeteries.

In 2009, Duane was honored as Glenwood Area Chamber of Commerce's Citizen of the Year. Also, he was recognized by the Mills County Extension Office for 30 years of service for clerking the annual county fair 4-H livestock sales.

Duane enjoyed traveling, antiquing, making Christmas candy, and following the activities of his grandchildren and great-grandchildren.

He was preceded in death by his parents, grandparents and many cousins.

We are really sorry to hear of Duanes passing. I don’t believe I ever heard a bad word about Duane. Everybody liked him. He was always willing to help out with all kinds of community activities. He was a mainstay at the Mineola State Bank and will truly be missed!
We send our sincere condolences to Rose and the entire family.
Our prayers and thoughts are with all of you.
Larry and Terri Winum

TO Aunt Rose , David , Deb, Dan and Families .. Caring thoughts go out to you at this difficult time. When we would travel to Glenwood we would always get to visit, as well when Duane and Rose would visit us in Nebraska. It was always great to see them.. Though the words are few may they help to ease the loss of one so Dear to You. In Sympathy Tom and Suzanne Leet.

May the many memories of all Duane's activities and God's Comforting Hand be with you. My Father, .Levon Rohrberg, was a cousin of Duane's so we spent together at family gatherings and would stop at the Mineola Bank to say Hello.

Blessings and prayers. As cousins we had a lot of fun at the big birthday celebrations and playing together at Grampa Kahl’s barn on the home place. May God give you peace and comfort at this time. Comforting thoughts and prayers for Rose too
Cousin Betty Williams

The attached photos are added to the memorial of Duane Kahl to help share their legacy.

Please help memorize Duane Kahl by recording your attendance below.

Thank you for sharing your memory of Albert