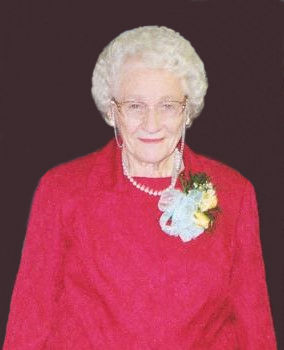 **Family Only**FUNERAL SERVICE will be held at 10:30 a.m. on Friday, March 20, 2020 at the Macedonia United Methodist Church with burial in the Macedonia Cemetery.

*We respectfully ask if you have or are experiencing cold, flu or allergy-like symptoms that you not attend. The funeral home will be following the CDC guidelines. Instead, please consider a safer alternative by leaving an online message to the family on her tribute page, sending a card to the family, or calling the funeral home so we may sign your name to the guest registry book.

OBITUARY
Alyce Darlyne Hobson, one of two children of Hazle Marie (Wilkinson) and Marion Cecil Schwinderman, was born on February 8, 1923 on the farm west of Macedonia, Iowa. Fondly known as "Darlyne", she grew up and attended school at Macedonia, graduating from Macedonia Consolidated School in 1941. Following school, Darlyne worked at the bank in Macedonia for three years. She went to Washington, D.C., where she worked as secretary to the Engineers for one year. In 1945, Darlyne attended Morningside College in Sioux City, Iowa and graduated in 1948 with a Bachelor's Degree in school music. She taught school vocal music at Paullina, Iowa, Macedonia Consolidated, Carson-Macedonia, and Treynor, Iowa. In 1968, she graduated from Drake University in Des Moines, Iowa, receiving her Master's degree in school music while she continued teaching at Carson-Macedonia. In 1985, Darlyne received her Master's of Science degree in special education from the University of Nebraska in Omaha and taught in the resource room at the Carson-Macedonia school until her retirement in 1985.

Darlyne and Dale Edward Hobson were married on December 27, 1950 at the Macedonia United Methodist Church. They made their home in Macedonia and their marriage was blessed with two children, Ginger Marie and Gregory Dale.

Darlyne was an active member of the Macedonia community. She was a member of the Macedonia United Methodist Church, serving as church choir director for over 50 years, United Methodist Women, Helping Hand Circle, Macedonia Library Club, American Legion Auxiliary, Fire Bells, Muphiesilon (a music honor society), and Alpha Sigma Society. She also had the honor of serving as grand marshal at a Doni Days parade.

Darlyne had a lifelong love of music. She and Dale enjoyed traveling, trips to the casinos, playing cards, and dancing.

Darlyne and Dale were married 50 years when Dale died at home on April 28, 2001. Darlyne continued to live in their home until August 2015 when she moved an assisted living facility in Creston, Iowa. In December 2016, Darlyne moved to the Clearview Nursing Home in Clearfield, Iowa where she lived until March 2018, when a fire broke out at the nursing home. She was transferred to their other nursing facility in Mt. Ayr, Iowa.

Darlyne passed away in Mt. Ayr on March 12, 2020 at the age of 97 years, 1 month, and 4 days. In addition to her beloved husband Dale, she was preceded in death by her parents; brother George Schwinderman; brothers-in-law, William Hobson, Robert Hobson, Donald Hobson, and Max Hobson; and sisters-in-law, Janice Meister and Doris Crisler.

Darlyne is survived by her daughter Ginger Myers and husband Gary of Blockton, IA; son Greg Hobson of North Hollywood, CA; grandchildren, Mark Carlsen and wife Veronica, and Jamie Steward; great granddaughter, Madison Steward; step grandchildren, Mark Myers and wife Michelle, and their children, James and Lexie, Melissa Nation and husband Brett and their children, Jacob and Samantha, Monica Pena and her 3 sons, and Tony Pena; nieces and nephews; and other relatives and friends.

My condolences losing your mom. She was a dedicated teacher, coworker, & a friend. She is with God now & at peace playing His music. RIP Darlyne.

So sorry to hear of Darlyne’s passing. She was always friendly, sweet and always spoke when you saw her. I will always remember her for her German Chocolate cakes. Lorna Blackburn (Husz)

My heart and paryers go out to the family. May the Good lord give you comfort and peace

My heart and paryers go out to the family. Nay you find comfort and peace may the good lord watch over you. and keep you in his most loving care

I have fond memories of Mrs Hobson in her role as a substitute teacher at Carson-Macedonia School. I attended school there in late 80s/early 90s. I myself am now a music teacher! Anyway, so very sorry for your loss.
Anna (Plagman) Davis
Riverside Class of 2001

When I remember you, I remember your classical approach to music. I remember your hospitality and inviting nature to include me in the choirs you directed. You helped me be a better Christian vocalist. HE gave me the pipes and you showed me how to use them to serve him with praise and prayerful song. You and the church choir you directed are two of the great blessings of my life.

With Love and Respect,

One of your bass singers
DCHamilton

Not enough room! I have always been amazed by her Easter plays at church and we were always singing Christ the Lord is Risen Today (I think) as the sun streamed through the stained glass windows of the nave.

Mrs. Hobson was an amazing teacher. I still tell people about our elementary classes on classical music. And if you dropped a needle on the LP I might still be able to name a few of the pieces and the composer! Our love and prayers.

So sorry to hear of your loss. You are in our prayers.

Our Sympathy sent to the family from Montana! Sweet memories of all her musical talents!!

As one of many former students, I am so grateful and fortunate to have had “Mrs. Hobson” as a music teacher, particularly during the formative years in grade school. She introduced us to classical music, making us take notes as we listened to the William Tell Overture, etc. and then quizzing us to “name that tune”. Sometimes she may have been a little strict, but she probably was the most influential teacher I ever had. My love for music definitely is rooted in that cold, tiny music room off the lunchroom. Thank you Mrs. Hobson. My deepest sympathies for Ginger and Greg, may you cherish every memory of your special mom.

God Bless you, Mrs. Hobson. You certainly left your mark on this work.

Some ot my earliest memories nclude Mrs. Hobson. At school and at church, she is the one who opened the world of music for me. The appreciation and joy of music to this day is because of her. I remember in first or second grade her asking us what instrument was most like the human voice, and I still think of her when I hear a violin. Every time I hear or see an organ I can see her playing in our church, it was amazing to me, such a complicated instrument. My deepest sympathy to her family, she touched so lives and I will never forget her and the gift of music.

How this woman influenced my life. From kindergarten through high school she taught and brought music into my life, an appreciation of music and the joy of music. And even more so at church where she led the choir and played the organ. I can never repay her for all she gave me.y deepest sympathy to her family. Cindy (Raney) Jeffrey.

I an soo sorry to hear this, We had no idea she passed! Please know we are praying for your family. We love Darlyne! My parents had her in high school and she always directed the community contata! She was and is loved dearly!!!! So sorry for your loss of a beautiful Mom. Sending love and prayers, Whitey and Donna McClai n

Ginger, I just wanted to say how sorry that I am to hear of your mother’s passing. What a blessing to have her closer to you in the last few years. I feel fortunate to have met her, while in Clearfield and to have gotten to know you and Gary, as well. Hold tight to the sweet and happy memories. Laugh when you can as some memories may slide down your cheeks too.
Hugs to you...
Susie Nelson

Mar
Friday
Macedonia United Methodist Church
308 Evans Street
Macedonia, Iowa 51549
10:30 AM
This is for family only. In keeping with the CDC guidelines, only 10 guests will be allowed in the church at one time.
Directions  Add to Calendar
Send Flowers Send Flowers to Service

The attached photos are added to the memorial of Darlyne Hobson to help share their legacy.

Please help memorize Darlyne Hobson by recording your attendance below.

Thank you for sharing your memory of Alyce