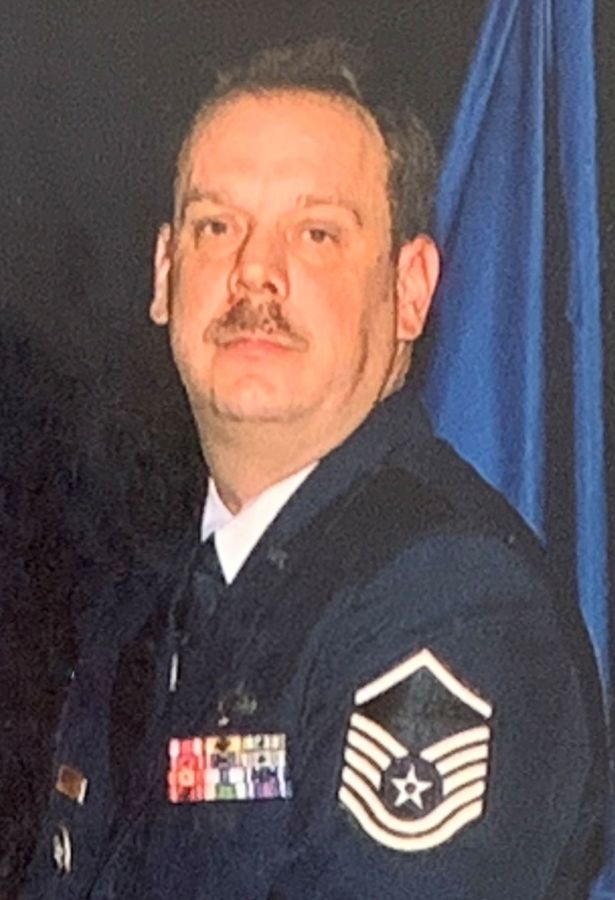 *We respectfully ask if you have or are experiencing cold, flu or allergy-like symptoms that you not attend the visitation or funeral. Instead, please consider a safer alternative by leaving an online message to the family on the tribute page, sending a card to the family, or calling the funeral home and we can sign your name to the guest register book.

Memorials: In lieu of flowers memorials may be directed to the family.

David Frederick Borck, one of three sons of Hylas and Dorothy (Kaczik) Borck was born on September 26, 1961 in Milwaukee, WI. He graduated high school in Springfield, OH in 1979. In 1983 he began his career with the United States Air Force. David was stationed at Wright-Patterson Air Force Base from 1983-1987, RAF Bentwaters (now closed) in the United Kingdom from 1987 - 1991, Bergstrom AFB (now closed) in TX in 1991, Lowry AFB in Aurora, CO, the Air Force Academy, Randolph AFB in TX, and Offutt Air Force Base in 2001 until his retirement. David served with the United States Air Force for 23 years retiring in 2006 with the rank of Master Sargent.

On May 31, 1986 David married Melissa Sue Fritz in New Carlisle, OH. The couple was blessed with two children Corey and Courtney. David and Melissa divorced in 2014 but they remained very close friends.

David enjoyed being outdoors hunting and fishing, was an avid Ohio State Buckeye and Green Bay Packer fan. He was always there to lend a hand to anyone who asked him for help. Most of all, he loved being a grandpa to his four grandchildren, his family was his true pride and joy.

David passed away on March 14, 2020 in Glenwood, IA and is preceded in death by both his parents; and brother, John Borck.

David is survived by his son, Corey Borck and his wife, Whitney of Bellevue, NE; daughter, Courtney Borck and her husband, Brayton Astle of Idaho Falls, ID; four grandchildren, Noah and Aubree Borck and Makenna and Benton Astle; former wife and close friend, Melissa Borck of Glenwood, IA; brother, Tom Borck and his wife Barb of Lady Lake, FL; sister-in-law, Carol Borck of Springfield, OH; a nephew and four nieces, other relatives and a host of many special friends.

Dave, you will always be remembered for your heart of gold. You always had chocolate and an encouraging word for those bad times. Rest in peace. To the Borck family, I am so very sorry for your loss. Please know you kids and your families were spoken of often with much love and great pride.

So sad to hear! Dave was a great guy and always willing to help me out! Great memories from Bentwaters! RIP Dave, prayers to family and friends.

I am so distraught to hear that Dave is no longer with us. He was a blast to be around. My biggest memory of many memories of Dave was his ability to act. I requested that he help me with my lesson on conflict management. I told him to go all out. Man did he! He let me have it in front of a room full of college students (ROTC cadets). At the end he through a stack of papers all over the class room and walked out. I then looked at all the cadets (one actually jumped up in a panic to pick up all the papers) and asked “can this happen and how should you handle conflict?” Then I had to take a break from laughing/crying so hard. All the cadets were freaked! Dave was perfect - I think he enjoyed yelling at me a little too much. Thanks Dave for the great times. You were a true friend.

My Deepest Sympathies. Have Great Memories of our time at RAF Bentwaters UK. RIP My Little Brother.

Dave was a coworker who brightened my work days with his steadfast humour and kindness. He deeply loved his family and my thoughts go out to you during your loss!

Dave was always such a nice man and he will be greatly missed by all who knew him. We are keeping all of you in our prayers. Rest Peacefully Dave! With our deepest sympathy, Karl and Suanne Hastie

Mar
Monday
Loess Hills Funeral Home - Glenwood
112 N Vine Street
Glenwood, Iowa 51534
9:00 AM - 7:00 PM
This is an open visitation. The family will be present from 5:00 p.m to 7:00 p.m. As per guidelines of the CDC we are only allowed to have 10 people in the chapel at one time.
Directions  Add to Calendar
Send Flowers Send Flowers to Visitation

The attached photos are added to the memorial of David Borck to help share their legacy.

Please help memorize David Borck by recording your attendance below.

Thank you for sharing your memory of David