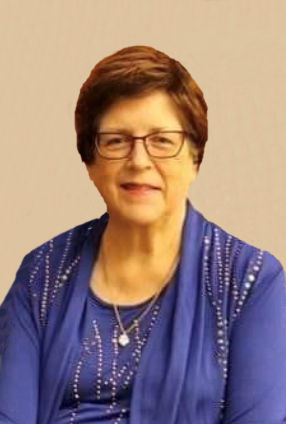 Memorials may be directed to the family where they will be given to charities in honor of Pat.

* The funeral home will follow state and federal guidelines for COVID-19 and we will only be allowed to have 10 people in the funeral home at one. We respectfully ask if you have or are experiencing cold, flu or allergy-like symptoms that you not attend the visitation. Instead, please consider a safer alternative by leaving an online message to the family on her tribute page, sending a card to the family, or calling the funeral home so we may sign your name to the guest registry book.

Patricia Joan Nehe Eyler was born in Council Bluffs, Iowa on February 25, 1956 to Eugene F. and Margaret Ann Connelly Nehe. She was the youngest of five children. Pat graduated from Oakland High School in 1974. After high school she attended Northwest Missouri State University to study Elementary Education. After graduating in 1978, Pat returned to Oakland to teach elementary school where she remained for her entire career.
On August 9th of 1980 Patricia was married to David Eric Eyler. To this union they were blessed with three children: Daniel Eric in 1985, John Joseph in 1986, and Emily Elizabeth in 1991. Pat continued teaching in the first, second, and third grades for thirty three years, retiring from Riverside Elementary in 2011. After retirement she kept busy at home helping on the family farm.
Pat is preceded in death by her parents Margaret and Eugene; stepfather Leland Harbour; and father-in-law Donald Eyler.
Pat is survived by her husband of nearly 40 years David; son Daniel of Creston, IA; son John and girlfriend Jenn Wilson of Oakland, IA; daughter Emily Eyler and wife Kelsi of Audubon, IA; brother Bob Nehe and wife Miriam of Omaha, NE; sisters, Nancy Lyman and her husband Dennis of Oakland, IA, Mary Jane Chamberlain and her husband Jim of Omaha, NE; Jeanne Archer and her husband Len of St. Joseph, MO; mother-in-law, Doris Eyler of Council Bluffs, IA; sister-in-law, Deriece "Dee" Ward and her husband Jerry of Waverly, NE; numerous nieces and nephews, as well as many friends.
Pat enjoyed reading in her spare time and singing at church. What brought her the most joy in life was spending time with family and being around children every day during her long teaching career.

4 people have supported the family by purchasing them flowers or gifts from the Healing Registry.

David, Danny, John, Emily
I am so thankful to have known Patty. I guess I called her Patty as often as I called her Pat. She always made time for me with a smile and calm demeanor. Many times I would wander into her room just for a quick pick me up. She was a gift to so many students and staff that probably didn't realize at the time the specialness that was Pat. She was willing to let me do some "unusual" lessons in her room and made me smile at the outcome which wasn't always a winner lesson. She shared about all of you but you Emily I know the best.This isn't just old Mrs. Hubbard counselor talk, your mom was special. May you find comfort and peace in all your memories.
Marlene Hubbard

Eyler Family,
Please accept my sympathy at this time. Patty was always cheerful and easy to talk with. We both started teaching at Oakland during the same school year--Patty at the elementary--I was at the high school. While I left Oakland for a period of time, I was fortunate that Patty was my son's 2nd grade teacher. Thanks for sharing her with us.

I just want to say how sorry I'am for not including Danny in my Tribute to Pat. I took care of Danny for afew years and forgot to include him with his family, David, Danny, John and Emily.

I enjoyed working with Patty so much. I didn’t get to work with her much until the last few years when we taught third grade together. She was always so calm, didn’t raise her voice much. She was willing to do whatever was required for paperwork to meet our standards and objectives. We had some great conversations over lunch, when I got to keep up with her life and Danny, John, and Emily. She will be missed by many teacher friends and former students. My sympathy to her family. May her memory bring you comfort.
Donna Rold

I'm saddened to hear of Pat's passing. My brothers and I spent a number of summers working for the Eyler family walking beans and sometimes throwing hay bales. Those were memorable times for a young adult and Pat was an integral part of those memories. I will cherish the value of hard work that I learned from your family during those days of my life. Your family showed such generosity to my brothers and I during those times.

I pray you each will find peace and joy in the days ahead. My deepest sympathies to each of you for your loss.

So very sorry to hear of Pat's passing. She was such a Beautiful person, inside and out.
My thoughts and prayers are with David, Emily and John.

Dave, John, Emily, and Danny - So sorry to hear. Keeping you all in my prayers. May the promise of everlasting life and the faith that you will be reunited one day bring you comfort at this time. Marlene and Tom Novotny

I remember when Pat was born into a family I loved. I watched her grow up and become The Teacher Next Door to my classroom. We shared so much. Patty had some rough days those years ,but she always came down the hall with a smile. Her kids never knew and they loved her...a great Second Grade teacher. Sad and having many memories. God be with you all. Gay

Apr
Sunday
Loess Hills Funeral Home - Carson
420 S. Oak
Carson, Iowa 51525
12:00 PM - 5:00 PM
Per State and Federal regulations we only allowed to have 10 people in the funeral home at one time. Please check in with the funeral home staff when you arrive for the visitation.
Directions  Add to Calendar
Send Flowers Send Flowers to Visitation

The attached photos are added to the memorial of Pat Eyler to help share their legacy.

Please help memorize Pat Eyler by recording your attendance below.

Thank you for sharing your memory of Patricia